Summer and the Fire Constitution

Summer lovin’, had me a blaaaast!  Those famous words from a famous musical number are the easiest way for me to describe the fire constitution and the fire element in general.  Ask a kid how they feel about the school year ending and the summer starting…that’s the energy of the fire.

Most people over the age of 18 understand the fire element to a point because the energy of the element work as a fractal. (link to Aaron’s blog post about fractals!)  Starting around puberty and running through the mid to late 20s is the fire time of life for most people.  It’s that feeling of “I’m a teenager and just want to have fun”; intense crushes, prone to trying vices, throwing caution into the wind, and intense vulnerability and hyper-vigilance about how one is perceived by others.

“Do you love me?”  I was asked this once by a 5th grade boy in our office.  My parents have known the mom forever and the boy since he was born.  I had just met this kid and this was possibly the first words he ever said to me.  As he has matured and is now in high school, he has blossomed into a textbook fire constitution; even having written his own play that his school has decided to put on.  He’s dramatic and emotionally volatile and very open about information.  When I get new fire constitutions patients they almost always spill their guts on the first visit.  It’s not too much information about their pain like other people (for example: “when I’m in car position this hurts and when I walk it’s this”), but rather a lot of personal information. (for example: “I’ve been having a lot of sex recently and drinking and smoking a lot of pot”)  The open type of fire constitution will tell you their personal life story immediately and hope you still like them.  The closed type fire constitution is essentially the opposite and will slowly dole out details until they trust you fully, then the vault will swing wide open.

This brings up the biggest issues for Fire Constitutions.  These are taken from Five Element Constitutional Acupuncture written by Hicks, Hicks, and Mole in 2009.

Authenticity is a major issue with Fire constitutions.  They like to see that people are being true to themselves.  This differs than the water element’s need for truth and what is right to the world:  Authenticity has more to do with what is right to the person.  Fire constitutions will almost always choose the person over everything else.  It’s like the Don Henley song “Heart of the Matter”.  Cut through the crap and get to the core.

Fire constitutions can be annoyingly cheerful.  When times get rough, they are the ones still singing a tune and trying to lighten the mood.  In their opinion, life is meant to be fun.  As a fire constitution, I remember when I was in 9th grade I told my parents that if there was some sort of tragedy and we were locked in the basement for months at a time I would bring my guitar for entertainment.  On the flip side, when a fire constitution loses that inner light, nothing will cheer them up.

Fires find humor EVERYWHERE.  Here could be a common dialogue between husband and wife:

Wife:  “At work, I was put in awkward positions all day. I’m so tired and sore.”

It’s a common joke but in this case the husband is the fire constitution.  A bunch of friends and I were getting ready to go tailgate a concert once.  After filling the trunk, the husband says

Husband: “Do we have everything?”

Wife:  “No you forgot the condoms.”

She was obviously joking, but that’s the thing.  She saw a joke where no one else did.  Very common fire constitution trait.

A fire constitution will typically go one step too far in what they say.  They feel that personal information is meant for everyone because they are just being themselves.  I know I’ve had a history of “foot in mouth disease.”  Over time I’ve learned to control what information I share and have gotten very good at controlling it since becoming an acupuncturist.  The virtue that all fires work towards is propriety or essentially doing the right thing at the right time.  Fires are the ones showing up to a black tie event in a Hawaiian shirt.  Fires are the ones trying to play rock music at a funeral.  Stuff like that.  For anyone who watches The Office, Michael Scott is a classic fire constitution.  There’s an episode where it’s a colleagues wedding and he tries to stand up and give a speech during the reception as a basic guest and keeps saying the wrong stuff.  It’s brutal, awkward, uncomfortable, humorous all at the same time.

This concept of propriety can also crop up in the form of personal space issues.  Fire CFs  might be a close talker, or a over-hugger, or like my dog (who I believe is a fire constitution) she would stick her nose right up skirts until we told her it wasn’t appropriate.  A fire constitution roommate might walk through a common area naked or show inappropriate pictures as well.

Fires can be natural performers.  It starts with propriety which in a different form is just keeping a beat.  Playing the right music at the right time.  At the same time, the spirit resides in the heart and music is the voice of the spirit.  We love to sing, play, act, and generally shine through.  I’ve also noticed that fires not only love to do impressions but we’re very good at it.  With performing comes drama though and fires can be very volatile with the histrionics.

Vulnerability is huge with fires.  We’re either too open or too closed.  This is especially true if we’ve let someone into our personal space before and they burned us.  It can take a lot to open back up to the next person.  The pericardium is a Chinese organ that is our heart protector.  I equate it to emotional armor.  After awhile, it becomes overloaded and symptoms might start.  Heart palpitations, pain between the shoulder blades, anxiety, etc.  Everyone needs to be safe within their own skin.  Have you ever lived with someone you didn’t like?  Or worked with someone who was always yelling at you or telling you how poor of a job you did?  That’s a pericardium overload nightmare and I bet you developed symptoms because of it.

If you have a fire element in your family, tell them you love them, dance with them, and be goofy.  They will love you for it and open up to you.

Other aspects of Fire CFs

Eyes:  Twinkle, sparkle, always in front of the camera.  There can also be a vulnerability to it like Princess Diana.  In the picture below there is a definite twinkle but she looks like she’s hiding something or is just sick of being too public about her life.  Vulnerable. 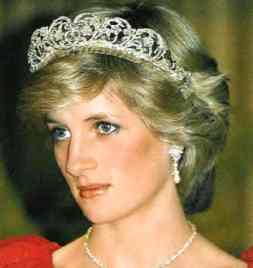 Hair:  Most red heads are fires.  This is fairly self-explanatory.

Go do something spontaneous and fun this summer!