Summer and the Fire Constitution 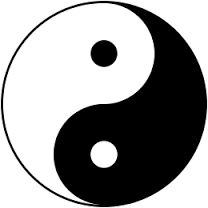 What does the Yin/Yang Symbol Mean?

Millions upon millions of Americans know this symbol.  It has become incredibly common to the point that no words are needed to explain what it is.  But how many people truly understand it?  Learning about Yin and Yang is day 1 in Acupuncture school.  Yin/Yang is the entire basis of Chinese Medicine.  When I began my practice, I spoke about it as if people knew exactly what I was talking about yet I still get funny looks when I describe it.

Starting at the beginning:  What do the Chinese Words Mean?

There’s no better place to start than looking at the Chinese words.  Each word in Chinese is built around smaller words.  That will be discussed in future posts.  In school, we learned that the small symbols in the word for Yang mean “the sunny side of the mountain” and for Yin it is “the shady side of the mountain.”

Yin and Yang are relative to each other?

Precisely.  You can’t have one without the other.  They NEED each other.  More on that later.  So any object, person, activity, etc will always be yin in nature AND yang in nature when compared something else.  That is the key element to the picture above.  The black (yin section) and the white (yang section) are not only next to each other but also within each other.  They are created in comparison to and from each other.

This is where you mention a fractal, yes?

Of course!  Yin and Yang are a fractal.  No matter how you slice something there will always be both.  Lets use the example of a party.  If I throw a party at my house, that will be Yang in comparison to sitting on the couch and watching a movie.  The party requires more energy and is more upbeat than the movie watching; but the party will be more Yin in comparison than going for a hike because the hike is outdoors, exploratory, and in a way requiring more energy.

So what’s up with the small dots in the middle of each section?

This is where each of Yin and Yang are created within each other.  Look at the white (yang) section in the symbol above.  When doing activity you never hit your peak immediately, and that’s why it starts as just a small portion.  You wake up (more yang than sleeping) and it takes some time to get the gears turning.  Over time, your energy will peak and so will your activity; but only when you hit that peak of energy usage will the smallest bit of exhaustion start to build inside of you.  What this means is that a true yin activity like sleeping can only be properly built by the right usage of yang.  If you are too restful (yin) throughout the day, you will not be tired at the end of the day.  If you are too energetic (yang) through the night, you will not have the proper energy the following day.  YIN AND YANG NEED EACH OTHER.

How does this apply to Acupuncture?

Right in the middle of writing this post I got cut off and distracted, then decided to eat lunch.  As I was eating my niece (Ayla) was asking my mom about why her mouth was wet which led to a quick discussion on saliva, digestion, and energy.  Proper digestion does lead to proper energy, but when most Americans think of proper digestion we think of proper food, enzymes, supplements, etc.  What we don’t think about it is WHAT we are doing while we eat!  Do you eat while working?  Standing up?  Watching gory tv?  These are all counterproductive to what eating is and could be causing a lack of energy or improper digestion (indigestion).