The Perfect Acupoint for Star Wars Characters: Episodes 4, 5, and 6

The Liver Official: The CEO of Your Body 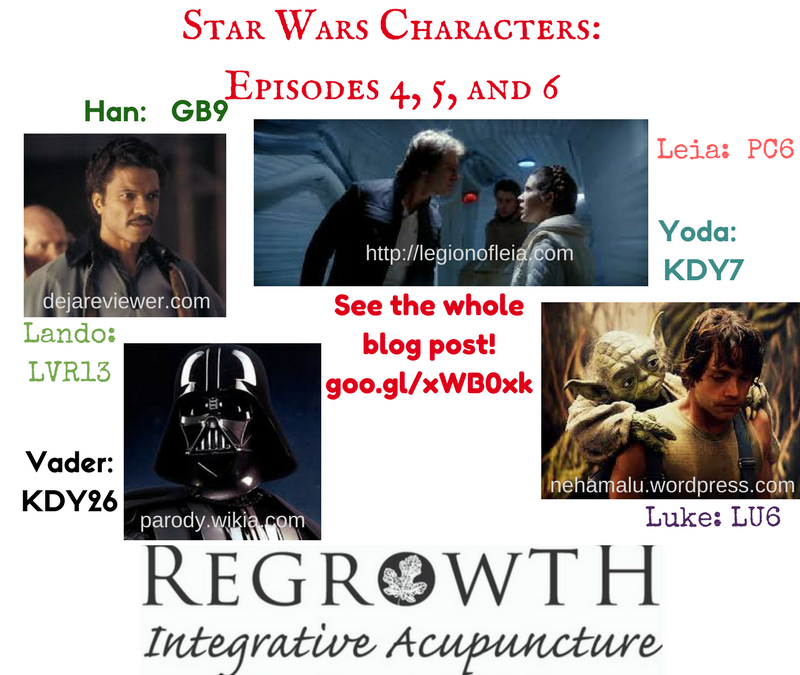 The acupoint KDY 26 is called “Amidst Elegance” and helps a patient realize that they can move on from past events that they feel shameful about.  When I first learned about this, I connected it to Darth Vader and how he almost ruined the Star Wars galaxy but righted himself energetically by killing the Emperor.  Afterward, as he is dying, he tells Luke, his son, how he felt saved.   Since that day, I’ve always called it “Darth Vader” point, telling patients that if he can come back from the dark side, they can come back from what lingers in their past.

KDY 26 and Darth Vader then sparked the idea for me:  What acupoint do other characters in Star Wars need?  The trick is picking a moment in time that they would need the treatment since each character grows throughout the movies.  This is all for fun and for helping people connect to the medicine.  Enjoy! 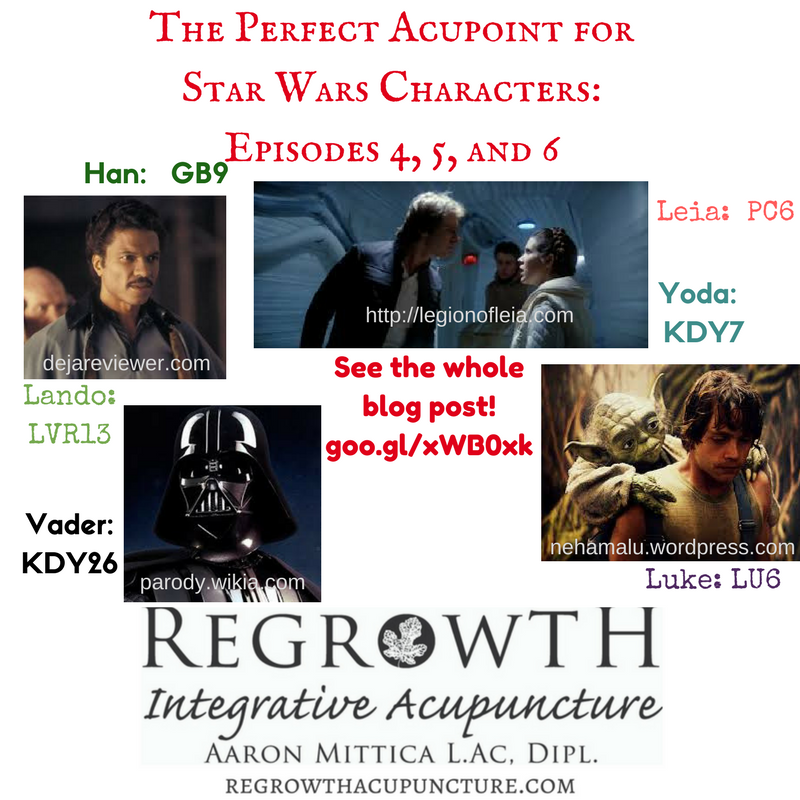 Han Solo:  He is most concerned with winning and reaching goals.  Likes to gloats about how fast his ship is but in a way that also puts other ships down.  He is flighty and has issues staying and making commitments.  In the end is deeply loyal to0his  friends but has issues setting roots.

Point Needed:  Gallbladder 9 – “Heavenly Rushing”  GB 9 is where the Gallbladder and Urinary Bladder energies intersect.  The Gallbladder helps with judgement, decision making, and growth while the Bladder is in charge of distributing resources properly and being vigilant.  When this relationship becomes imbalanced, all of the resources can go toward one goal and the person can seem like they have blinders on.    GB 9 has the role of releasing hyper attention being paid to one task and spreading it around.  This will distribute resources correctly and allow all of the fires of life to remain at a suitable level.  For Han, it will help him get over the need to be a vigilante, paying Jabba what he owes him, and allowing him to give his attention to all the people around him. (Chewy, Leia, the Rebellion, etc)

Luke Skywalker:  Luke has dad issues.  He didn’t know his real father and his uncle didn’t allow him to do what he wanted.  He craved a father figure and eventually found two (Obi-Wan and Yoda) though Luke had trouble trusting both when their advice wasn’t what he wanted to hear.  Time and again Luke claimed he was open and ready to listen when in reality he put many limitations on himself.

Point needed:  Lung 6 – “Greatest Opening”  As the xi-cleft point on the meridian, LU 6 can be a powerful point for altering a stuck lung.  The Lung is a sensitive organ and grief can fester, causing a person to become disenfranchised with life:  questioning why bad things happen.  LU 6 helps this person move on from the grief and get back to a state of openness which is called “Beginner’s Mind.”  A beginner’s mind has no preconceived notions and is therefore open to anything and in a total state of learning.  Doubt does not reside in a beginner’s mind.  As Luke goes through his training, this is the state his mind needs to be in:  open to possibilities.

Leia Organa –  Due to her lofty social status Leia needs to have a shield of armor and not show her true emotions.  People rely on her.  The only person she truly allows into the armor, Han, isn’t grounded enough and runs away.  They then play the on and off love game until he’s literally frozen in carbonite and is unattainable.  This is the moment Leia shows her true feelings.

Point needed:  Pericardium 6 – “Inner Frontier Gate”  The Pericardium is our bodyguard organ.  If people are worthy enough, they are allowed access to the Heart, where the spirit lives.  This is our most sacred area.  If our past has taught us to keep people out either through past betrayal or in Leia’s case, simple childhood structure, then there is a fear that typically keeps people out.  Only when that fear is pushed to the brink does she open up.  Too little too late.  PC 6 helps keep the bodyguard in a balanced place, opening and closing appropriately to not only let people in but also to clean out our own trash.

Lando Calrissian –  Note that this is about the Lando in “The Empire Strikes Back” and not “Return of the Jedi.”  In Cloud City, Lando is worried about his people and the community he has helped foster.  Due to that perspective, Lando chooses to protect his own vs. old friends when the Empire offers him a deal.  Though he quickly realizes that his own community and his old friends are on the same side and clears the air; the damage had already been done.  It then takes drastic action to get back in the good graces of his old friends.

Point needed:  Liver 13 – “Chapter Gate/Gate of Law”  LVR 13 is a point with a lot of actions.  First off, it helps balance vision with the body/community.  In Lando’s case, the Earth element/sense of community overacted on the Wood element/forward vision.  When the Empire showed up at this door, he should have known that they weren’t there to play nice or follow through on promises.  Only when they double crossed him did he change his tune.  LVR 13 would be also be good for him after learning of the Empire’s deceit.  Chapter Gate signifies that the person is trying to close a chapter of life, which he does by leaving Cloud City and helping the rebellion.  Gate of Law signifies that there’s a past discretion toward him that ne needs to let go of.  He and Han have a back and forth where they talk about a time Han undermined him.  Maybe if he had let it go, he wouldn’t have taken the Empire’s deal in the first place.

Yoda –  Very old and wise Yoda already is.  Jing (life essence) is dwindling and he needs to make sure he rests.  He’s been at it a long time and needs maintenance to help his old body keep going.  Yoda only needs his body to make it to a certain point that he can pass on his wisdom to a an apprentice and move his own spirit into the next phase of life.

Point needed:  Kidney 7 – “Returning Current”  Being the metal point on the water meridian, it it inherently the tonification point for the Kidney and Jing, giving both more strength and vitality.  From a deeper perspective, KDY 7 helps people restart the cycle of the five elements by moving metal energy (autumn) into water energy (winter).  Yoda is at a weird place in life in that he has that energetic shift happening in many different ways including his only life (as he moves from his own crude matter body back into the force), his time on Dagobah (which has it’s own cycle that is ending), and his job as a Jedi Master (as he passes that along to Luke).  All of these reasons make this the perfect fractal point for him to help shift all that stuck energy.